109 years ago today, my Grandma Margaret Lucille Houselog Blomgren was born.  Here is some biographical information from find a grave:

Margaret L. Blomgren was born on May 31, 1905 in Grant County, Wisc. to Henry and Lena (Demuth) Houselog. When she was five years old the family moved to a farm near Hatfield where she attended school for eight years and then attended Pipestone High School and also one year of normal training at Pipestone. Margaret taught school for six years east of Hatfield and later substituted at Elkton. On June 16, 1930, she married Clarence Blomgren at Woodstock and they lived on a farm near Pipestone until 1937 when they moved to a farm northeast of Elkton. Clarence preceded her in death on March 15, 1970 and she moved into Elkton in December 1970. She entered Riverview Manor in October of 1994.

Here is a photo of Grandma with her family--her parents and siblings:
People in photo:
Mary, Louise, Joseph, Walter, Elmer, Margaret, Angeline, Henry and Lena--there is one other male who I can't name as it wasn't listed in find a grave...interesting!

Anyway, Happy Birthday Grandma!
at May 31, 2013 No comments: Links to this post

After work yesterday, A & Brad were heading to a baseball game in Woodbury (they lost in extra innings) and O and K were running around outside. I wanted to pick up a few more flowers from the campus greenhouse and Laura had commented that it had been a while since she had seen O, so I decided to pack up and head in to visit work friends and get a few more items for our garden.

When it was time to walk home, he decided he should walk--he didn't just walk, he ran the whole way.  Along the way, he found a really nice, large mud puddle.  He called back to me "Momma?"   I took it that he was asking "Mom, can I run through the puddle?" so I told him to go for it.  He joyously ran through the puddle and proceeded to face plant in the center of the puddle.

Thankfully, we had an audience who enjoyed the spectacle, we also had a relatively short distance to cover in order to arrive at home and jump in the warm, sudsy bathtub and we also had a very composed little boy tip toe home wearing his wet clothing.  He immediately jumped into the tub and was ready to go on another walk shortly after getting dried and dressed.
at May 30, 2013 No comments: Links to this post 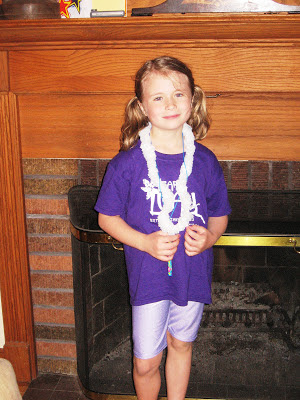 Last night was gymnastics night.  I knew K was going to be evaluated to see if she should move onto the next level of gymnastics, before I left her there while I took a rambunctious 3 year old to the library, I asked that she be an excellent listener and do her best as her teacher was asking her to perform skills.

I returned to pick her up and watched her do some nice front and back walk overs and just lovely bridges.  The teacher asked to visit with me before we left.  She recommended that K move from turners (beginner 2) to saltos (intermediate 2), skipping the twister (intermediate 1) class.  I could just see her blossom and hold her already very proud little neck a little straighter.  She took it all in stride and just beamed.   Way to go, KGO!
at May 29, 2013 No comments: Links to this post 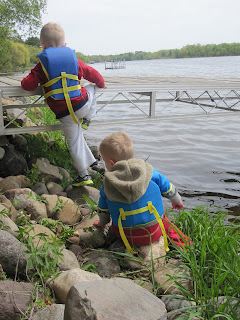 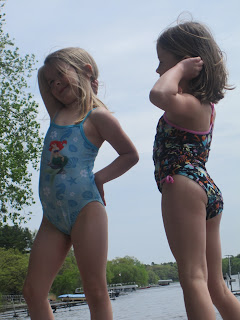 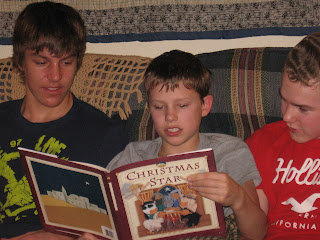 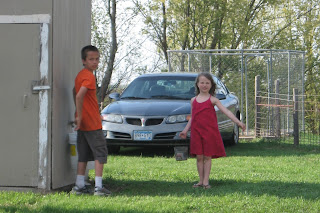 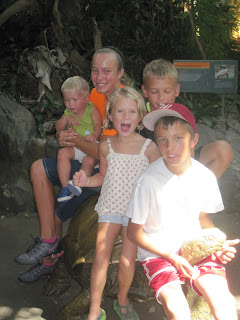 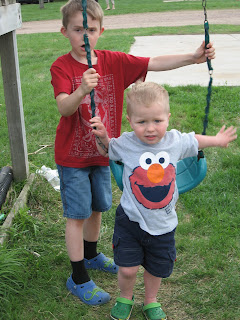 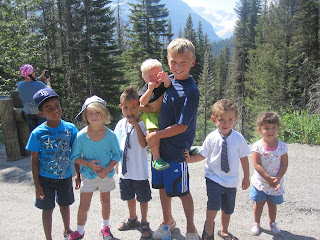 a day to celebrate cousin friendships.  Our family is blessed to have such cool family members.
at May 28, 2013 No comments: Links to this post 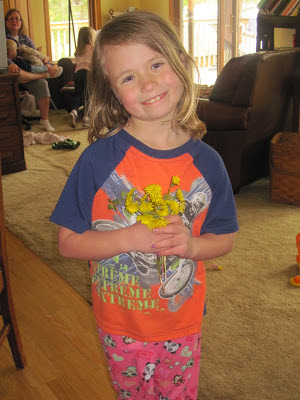 I received a dandy bouquet this weekend from our tiny beauty.  Thanks baby darlin'.
at May 28, 2013 No comments: Links to this post

It has been a late spring in the upper mid west, and I think the birds are quite pleased with the situation.  I was out for a jog on Saturday afternoon while O was down for a nap.  I traveled west on County Road Y near Wood Lake and saw cardinals, orioles and heard tons of bird songs that I had been missing.  Our family was intending on heading to Crex Meadows to check out the wildlife, but did run out of weekend time.

Birds are just such a lovely part of life.
at May 28, 2013 No comments: Links to this post


I received a photo from dear friend, Sharyl on Friday while at work...here is K and Alex at Fun and Fitness Day 2013.  K competed and completed the mile run--she said she wasn't last place and thought it might be kind of fun to jog with me this summer. 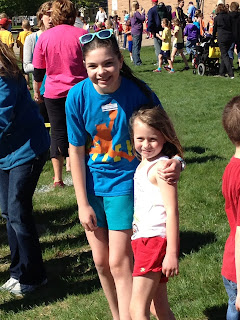 A missed his final fun and fitness day as he fell victim to the flu...he was pretty bummed out, but I think we can try to recreate.

It is pretty awesome to have days dedicated to wellness and learning how to take care of the physical part of our fitness. 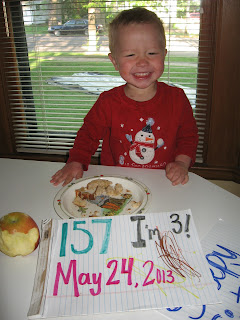 At breakfast, he wanted to sit on my lap, when I dressed him, he didn't protest and chose his new "football game" sweatshirt  from Grandma and Grandpa B.  I walked him out to the bike where Brad was to drive him to school and he said he wanted ME to drive him to school...I don't know how I did it, but I think he finally likes me ;).
at May 24, 2013 No comments: Links to this post

field trip one year ago... 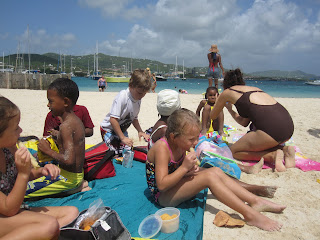 Last year on May 23, our class took a field trip to a lovely little island beach Hotel on the Cay.  This year K will be traveling with her class for field trip to the Minnesota Zoo--the place where Miss Haley attended High School.  Is that coincidence?  I would say it was meant to be!
at May 23, 2013 No comments: Links to this post

Today Osten, Katie, Brad and I drove into Crystal, Minnesota to celebrate cousin Dionne's 48th birthday. We dined at Perkins and enjoyed...